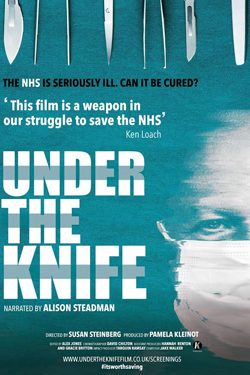 Narrated by Alison Steadman and directed by Emmy award-winning Susan Steinberg, Under The Knife uncovers the covert undermining of the NHS in the past three decades.

From its stormy birth through seven decades of turmoil and political warfare, it has withstood almost everything that has confronted it, until now.

'This film is a weapon in our struggle to save the NHS. Armed with the evidence so eloquently provided here, we can win this battle' - Ken Loach

Pam K Productions in partnership with Keep Our NHS Public and the Daily Mirror are hosting 55 FREE nationwide screenings between 14-19 October.