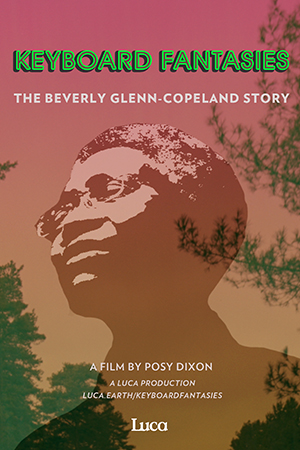 As a sci-fi obsessed woman living in near isolation, Beverly Glenn-Copeland wrote and self-released Keyboard Fantasies in Huntsville, Ontario back in 1986. Recorded in an Atari-powered home-studio, the cassette featured seven tracks of a curious folk-electronica hybrid, a sound realised far before its time. Three decades on, the musician–now Glenn Copeland–began to receive emails from people across the world, thanking him for the music they’d recently discovered. Courtesy of a rare-record collector in Japan, a reissue of Keyboard Fantasies and subsequent plays by Four Tet, Caribou and more, the music had finally found its audience two generations down the line.

Keyboard Fantasies: The Beverly Glenn-Copeland Story, tells the time-travelling tale of this mystical musician and vocalist, as the present finally catches up with him and he embarks on his first international tour at the age of 74. Capturing five decades of relentless musical output and shifting manifestations of gender and sexual identity set against a backdrop of profound social change, the film celebrates the unpredictable rhythms of life. A lullaby to soothe those souls struggling to find their place in the world.