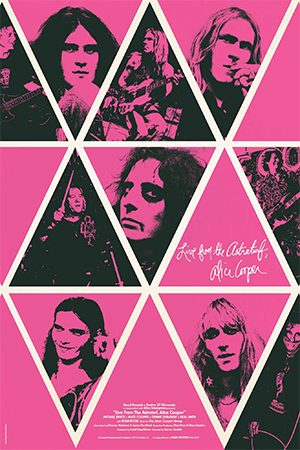 Live from the Astroturf, Alice Cooper

Live from the Astroturf, Alice Cooper

Live from the Astroturf, Alice Cooper is an award-winning documentary about the power of one person’s belief in a dream to achieve the impossible. Chris Penn, an Alice Cooper super-fan, goes through extraordinary lengths to convince the original lineup of his favorite band to reunite after parting ways over 40 years ago, and makes it happen in his record store! The historic event, recognized by the Rock and Roll Hall of Fame, was captured on camera in a blistering set of redemptive Rock and Roll mayhem, and has become a defining moment in Alice Cooper’s career.

Based on the song 'Cold Cold Coffin' by Dennis Dunaway (Rock and Roll Hall of Fame Inductee, Founding Member of The Alice Cooper Group) this Rock Cinema Short tells the story of a wealthy tycoon who discovers his young bride married him for his Estate. Heartbroken and angry, he exacts revenge by having himself cryogenically frozen in order to outlive her so she can't get his money. Starring Dennis Dunaway and Calico Cooper.

Please note, this event is externally organised - so member discounts do not apply.